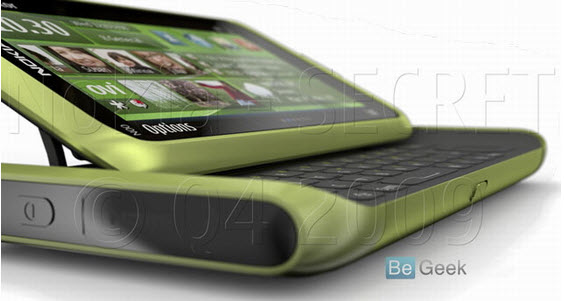 1. Another device that is believed will be announced in the very near future from Nokia is a new powerful Eseries smartphone running Symbian^3.

2. The E7-00 is also using the new Nokia naming convention. It reflects the high-end Eseries and could be the new communicator to replace the old E90.

3. As this is a business oriented device targeted to business customers, the hardware and software will also focus on the enterprise market.

6. The photo of E7-00 was leaked since early 2010 but many people believed it to be one of the Nseries because of it’s similarities to the N97. In fact, many believed the photo is the N98. If you look at the photo closely, you will see “N00″ printed next to the “Options” softkey.

7. In the photo, the green colour suggests only one thing – concept stage. In the old days, I remember seeing photos of a green Psion Series 5 codenamed Protea and when it went into production, it’s not green.

8. Seriously, the specification made me drool and thinking about that 4 inch screen made me excited even more because t would also be a very capable multimedia companion. Movies and videos will look gorgeous on that screen!

10. Well, we have to wait for the announcement to be sure of its real specifications. Bring it on Nokia!!!